‘To confront face to face’, ‘to meet as an adversary’ – these are the meanings that stand at the medieval root of the English word ‘encounter’. Its Latin root, ‘incontra’, merges two layers of meaning: one is ‘in’ as in ‘getting into’, ‘approaching’, ‘getting involved with’; and the other is ‘contra’, as in ‘going against’, ‘opposing’, ‘confronting’. This double meaning has since turned in two semantic directions: to engage in a conflict and to meet someone casually or unexpectedly.
G 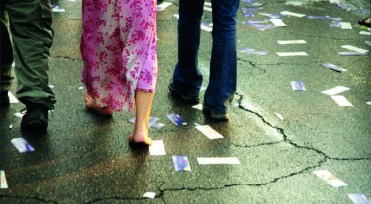 erman-Israeli relations have been shaped by history and by present events. The long German-Jewish history and especially the history of the Shoah plays a (changing) role in these relations and thus in today’s Israeli-German encounters. These are not the only influential factors: The Israeli-Palestinian conflict and its international reception is another. Different political, social, cultural, economical – and also private – interests have influenced the 50 years of official and unofficial (West) German-Israeli relations.
During these enCOUNTERs between artists from Israeli and German backgrounds, many other aspects of this relationship have been investigated. How can one relate to each other? Which forms of collaboration are possible and what does it mean to have an artistic encounter in the Israeli-German context of 2015? These questions relate to official paths and outlines, but even more so they turn towards the artists’ own interests, opening them up to the unexpected part of the encounter.
When Gershom Scholem wrote his letter Against the Myth of German-Jewish Dialogue in 1964 (a year before the start of official relations), he stressed the notion that, in order for a dialogue to take place, it would be important to address the other in terms of what s/he has to give and not what s/he has to give up. For Scholem, the preconditions for this dialogue were missing in the history of German-Jewish relations, except for in individual cases. He saw too much of the German side asking the Jewish side to give itself up as a prerequisite for (maybe) ‘being accepted’ and too much readiness to do so on the Jewish side. Even 50 years later, one still often sees that German-Israeli relations are based on expectations of giving up instead of giving, on fixed expectations of the other instead of meeting casually or unexpectedly. This holds for both sides, in both political and cultural arenas, but it is also changing and shifting over time.

In international artistic contexts, the hegemonic forms of expression, of what ‘politically correct’ is and how it is to be reflected in artistic works that stem from different social and cultural backgrounds have to be acknowledged. What are the preconditions of our dialogue? Are there any limits of speaking? Are there ‘acceptable’ and ‘unacceptable’ topics and forms of expression? Are there any limitations possible when a dialogue is to take place? The project enCOUNTERs has aimed at setting up the space and time for Israeli and German artists to encounter each other, to create a dialogue, to engage in giving, and to try to widen the space of perception by sharing knowledge and ideas – and thus also for German and Israeli audiences to encounter them and the works created in this process: to give and be given something to take away from these encounters, artistically, intellectually, and personally.

The first encounter took place between the four curators. We found out that there was an opportunity to receive funding from Germany to carry out an artistic project. It was the beginning of 2015, and the first time that the Israeli side had heard that we were celebrating 50 years of mutual diplomatic relations. For the German side it was also very important that it was 70 years since the liberation of the camps, which is marked as the International Holocaust Remembrance Day, in contrast to the Israeli Holocaust Memorial Day, which this year commemorated 72 years since the Warsaw Ghetto Uprising. We began encountering our different historical narratives.

We decided not to curate existing artistic works, but to create an encounter of ten artists: five from Israel and five from Germany, to create together a joint platform for developing works of art relating to German-Israeli relations. In many senses, the major challenge we were heading towards was sustaining the dialectic situation of the encounter – the ‘in’ and the ‘contra’ – as a creative modus throughout the process. The essence of this modus is, first of all, to be open to the unexpected, not to miss the contingencies of the encounter, and on the other hand to oppose it by always remaining aware of the hidden aspects or contra-possibilities that accompany it as its negative side. How does one keep a fractured structure and still walk upon solid ground?

We started investigating. How could we address Israeli-German relations in an artistic encounter? Which issues would we deal with? How could we prevent recreating all of the clichés that are usually mentioned with regard to those relations? We set the framework: We were going to have five meetings, each of them one-week-long: two in Tel Aviv, two in Frankfurt am Main and one in Berlin. In the last two meetings we would share the works with an audience. We sent an open call around German and Israeli art communities. From about 120 applications, we chose ten artists from different disciplinary backgrounds. It was important to us to engage this group in a mutual working process, enabling them to encounter each other and to benefit from the diversity of their backgrounds and experiences – to create the possibility for each artist to step outside of his/her comfort zone, to be open to new perspectives and new means of expression.

The first week in June in Tel Aviv was mainly dedicated to creating a flood of materials, to interweaving the historical and political with the present reality of the city. To go through its buildings, people and streets, to encounter the smells and sounds, the memories, the dreams, the leftover traces of different utopian ideas (which sometimes appear as a dystopian reality), to reveal the genealogy that followed on from them, to uncover the ruins they left behind. During this first encounter, artistic collaborations began assuming shape; projects and ideas began to develop. The next encounter at the end of July/the beginning of August in Frankfurt (where, from the 5th floor of the Mousonturm, we could see the European Central Bank) was dedicated to delving deeper into the projects. We kept the encounter going, adding more fragments to the evolving projects, taken from the people and places we met and visited in Frankfurt and, afterwards, at the end of August, at the Uferstudios in Berlin. In our fourth encounter in the second half of October, we are back in Tel Aviv, getting ready to encounter an audience, to share and open the dialogue even further.

During each encounter we invited people to introduce and discuss with us various topics to do with Israeli and German society and culture and their relations. We went to Tel Aviv’s old bus station and a Yiddish library, spoke about early Zionist rituals and the potential of political art, addressed the issue of compensation for Nazi crimes, spoke about the international perception of the Israeli-Palestinian conflict, of solidarity with Israel and anti-Zionism in Germany, and about how to present Jewishness in an exhibition and live as an Israeli in Berlin.
Over the course of the encounters, different kinds of collaboration emerged: from working together on a joint project to participating as a performer in another artist’s project, to interviewing someone and using his/her memories and impressions as material, or producing drawings and sharing ideas and knowledge.
It seems that when one is willing to encounter – that is, to create his/her reaction with open senses from ‘within’ as opposed to reacting from a safe zone on the outside – new perspectives can emerge, contingencies can evolve into pieces of art, widening the possibilities of perception within the complex history and present of these two societies that we are part of as a group and as individuals.
We would like to thank the Center for Contemporary Art in Tel Aviv and the Künstler­haus Mousonturm in Frankfurt am Main for their trust in this project and for all the support they provided us with in realizing it. Furthermore, we would like to thank all of the institutions that funded this project: the Federal Foreign Office of Germany and the German-Israeli Association as well as the Young Forum of the German-Israeli Association, the City of Frankfurt Department for Culture, the Naspa Foundation, and the General Consulate of the State of Israel for South Germany. For their support we would particularly like to thank the team of Mousonturm, Sergio Edelsztein and the team of CCA, Aaron Roth and Lukas Welz (DIG), Jörg Thums and the production team, and the ten wonderful artists for the great encounters we shared with you!
Noa Elran & Matthias Naumann